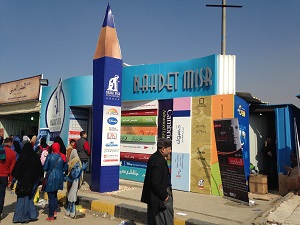 A few months ago the Cairo International Book Fair 2016 took place – an example of the book market in the Arab world, but also for digital awakening, with similar challenges for local publishers as found in western countries. But also a digital awakening bringing the Middle East possibilities of freedom of opinion and speech.

For saturated Europeans, used to Frankfurt Book Fair with their busy trade visitors clientele, book fairs in the Arab world at first are sometimes a loud, busy nightmare: the masses of visitors of all ages pushing through a few halls, sometimes tents, people negotiating loudly and many small cash registers placed at each stand-corner. Teachers and school classes converge with a year’s supply of textbooks, many travelers have long journeys behind them, in order to gain access to coveted literature. This year in Cairo there were „850 exhibitors and about 3 million visitors,“ said Sherif Bakr, General Manager at Al Arabi Publishing and Distributing. In comparison: Frankfurt Book Fair was visited by 275.000 visitors last year, the London Book Fair by 25.000 visitors. Karam Youssef, publisher of Al Kotob Khan publishing for example is at Cairo International Book Fair for the third times this year and says “I use this fair to meet other publishers and authors, but also to present our books to a broader, interested public. At the same time I am also the owner of a bookstore and supply my need for new releases.“

This orientation of the Cairo Book Fair, of course, is very closely connected to the rather rudimentary bookstores structure and the distribution of printed books in the Arab world. The local book fairs are primarily retail and tradeshows, as these are often the only way to get books for many people. The cross-border transfer is another barrier. Mansoura Ez-Eldin, one of the most famous writers in the Arabic language, knows the problem well: „It is very hard and is a serious problem to obtain books from Egypt, for example, in Morocco, Lebanon and the Gulf states.“

Digitization as a distribution opportunity

Regional borders in digital markets are per se no obstacles (and if they are it’s based more on legal regulations) and digital distribution can solve the problem of delivering content but provide at the same time a wider reader range. Especially as the proliferation of reading devices such as smartphones in all emerging markets is at least as high if not higher in relation to typical digital markets such as US / UK or Germany. So Ahmed Rashad writes in „Exploring Licensing Translation Rights in the Arab World“ (published in Publishing Research Quarterly, Springer): „Although the paper publishing industry appeared around 400 years later in the Arab world than in the West, we find that electronic publishing had appeared in Egypt and the Arab world in a much shorter time and maybe the difference will not exceed 10 years delay after the Western world … I assume that during the next 10 years 75 % of books in schools, universities and public libraries will be electronic or in digital format. And for any other styles or genre of books 25–30 % of total sales will be electronic.“

Karam Youssef has a similar point of view, anticipating „7-10 years“ to a more widespread provision of ebooks and points to the the problem „to eliminate first infrastructure problems: fast, stable and affordable access for all people“.

In fact, these efforts are progressing steadily, driven mainly in Egypt by a major mobile operator – no surprise when you think about the huge possible „smartphone reading“ market. And so it is not surprising that in time for this year’s Cairo International Book Fair, a giant like Google entered the ebook market, albeit in the first step only with the largest local publishing house, El Sherouk. But there arise problems, pointed out bySherif Bakr: „Any platforms that now sprout from the soil, want to sell, of course, focusing on bestsellers which are usually published by the big houses. That affects not only negotiations on conditions but also has disadvantages for smaller publishers, who can not compete here or not even come into play.“

Thinking of the russian digital market we see the consequences of on one hand terms of ebook use in an advanced market, but on the other hand the lacking willingness to pay for and the missing respect forcopyright. A similar situation can be found in the Arab world. Mansura Essedin: „Electronic books are sure to be a solution to many problems that affect the publishing industry in this country, but the piracy – converting large amounts of printed literature – is a huge issue. From an author’s point of view I cannot deny that this leads to a larger readership. But if, as I have read once, piracy accounts for 98 percent of the ebook market, the publishing industry will be hurt massively.“

The ebook – a piece of freedom and expression?

However, a side effect of digitization and the (largely) free available literature relates to the issue of censorship.
Mansura Essedin: „The Internet gives authors generally the opportunity to reach a larger readership for nonconformist literature on web sites or blogs.“ Sherif Bakr sees the same indicators for the media format eBook: „We can just generally bypass censorship which is established in many Arab countries with ebooks and we can even give more people the opportunity to publish, maybe as selfpublishers, about taboo topics too.” Mansura Essedin also discovered advantages of piracy: „Many censored printed books are available for example as a PDF bootleg on respective platforms outside of the official channels, some pirates proclaim their offer explicit as an act of resistance against censorship.“

The coming years will therefore continue to be exciting in terms of digitization and ebook distribution in these regions, markets, which are far away from the (supposed) saturation of western markets. The issue of freedom of expression and piracy remains ambivalent: a high proliferation of literature on freedom of opinion need not necessarily go hand in hand with the economic interests of the Arab publishers. And a fundamental problem that people sometimes tend to overlook in western countries is, as Karam Youssef says, theongoing struggle against illiteracy of many people in the region: „The amount of people who can read is unfortunately still relatively small and that is both a shame as well as dangerous.“

With thanks to all who made this Post possible by input and interviews, especially Mansura Essedin, Sherif Bakr and Karam Youssef. And thanks of course to Claudia Dobry and Iris Klose of Frankfurt Book Fair and Sabine Reddel of Goethe Institute Cairo for local support.